The ambassadors are seen as role models amongst their peers and have become the go-to pupils for all questions on the UAE. They also have an ambassador badge so they can be recognised easily. 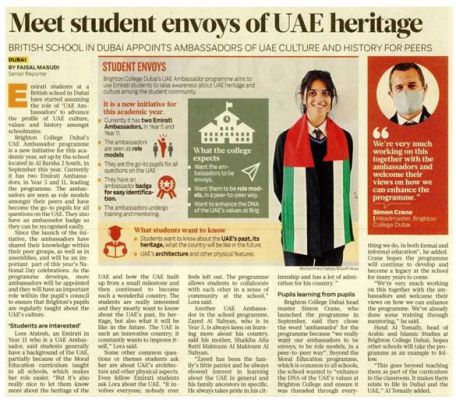 Emirati students at a British school in Dubai have started assuming the role of ‘UAE Ambassadors’ to advance the profile of UAE culture, values and history amongst schoolmates.

Brighton College Dubai’s UAE Ambassador programme is a new initiative for this academic year, set up by the school located in Al Barsha 2 South, in September this year. Currently it has two Emirati Ambassadors, in Year 5 and 11, leading the programme. The ambassadors are seen as role models amongst their peers and have become the go-to pupils for all questions on the UAE. They also have an ambassador badge so they can be recognised easily.

Since the launch of the initiative, the ambassadors have shared their knowledge within their peer groups, as well as in assemblies. As the programme develops, more ambassadors will be appointed and they will have an important role within the pupil’s council to ensure that Brighton’s pupils are regularly taught about the UAE’s culture.

Lora Atatreh, an Emirati in Year 11 who is a UAE Ambassador, said students generally have a background of the UAE, partially because of the Moral Education curriculum taught in all schools, which makes her role easier. “But it’s also really nice to let them know more about the heritage of the UAE and how the UAE built up from a small milestone and then continued to become such a wonderful country. The students are really interested and they mostly want to know about the UAE’s past, its heritage, but also what it will be like in the future. The UAE is such an innovative country; it constantly wants to improve itself,” Lora said.

Some other common questions or themes students ask her are about UAE’s architecture and other physical aspects. Even fellow Emirati students ask Lora about the UAE. “It involves everyone; nobody ever feels left out. The programme allows students to collaborate with each other in a sense of community at the school,” Lora said.

Another UAE Ambassador in the school programme, Zayed Al Nahyan, who is in Year 5, is always keen on learning more about his country, said his mother, Shaikha Alia Butti Maktoum Al Maktoum Al Nahyan. “Zayed has been the family’s little patriot and he always showed interest in learning about the UAE in general and his family ancestors in specific. He always takes pride in his citizenship and has a lot of admiration for his country. Brighton College has paved the way for Zayed to build on his patriotism and ignite his leadership ability. Since being assigned this role, he has been fully ascribed to his citizenship and the affiliation to his school community.”

Brighton College Dubai head master Simon Crane, who launched the programme in September, said they chose the word ‘ambassador’ for the programme because “we really want our ambassadors to be envoys, to be role models, in a peer-to-peer way”. Beyond the Moral Education programme, which is common to all schools, the school wanted to “enhance the DNA of the UAE’s values at Brighton College and ensure it was threaded through everything we do, in both formal and informal education”, he added. Crane hopes the programme will continue to develop and become a legacy at the school for many years to come.

For better web experience, please use the website in portrait mode